By some magic eclipse of time, it’s the last post of 2015! And what better way to ring in the good vibes for 2016 than by re-living the gloppy, sad-looking, mostly green messes of the last 12 months? Right? I thought so, too.

There is usually a theme to be found within my recipe fails, and this year is no different. I’m declaring the theme of 2015 to be GREEN GONE WRONG. Yes – all things green were the recipe fail specialty this year, probably as a result of my obsession with the *delicious* green recipes of the year, like the Magic Green Sauce, the Jalapeño Cilantro Dressing, the Kale Pesto, and beyond.

But there is a fine line with the green foods, and I crossed it just a few too many times.

So grab a coffee or a tea or a leftover Christmas cookie (please tell me you have the ones where the two Ritz crackers are spread with peanut butter and dipped in chocolate and sprinkles? no?! is this a tacky Midwest thing?) and pull up a chair. I mean, seriously – get comfortable. At this point, you might as well just be sitting in my house on a pile of my laundry examining all the little tufts of stray dog hair around our baseboard. That’s just how much we’re about to be up in each others’ business. 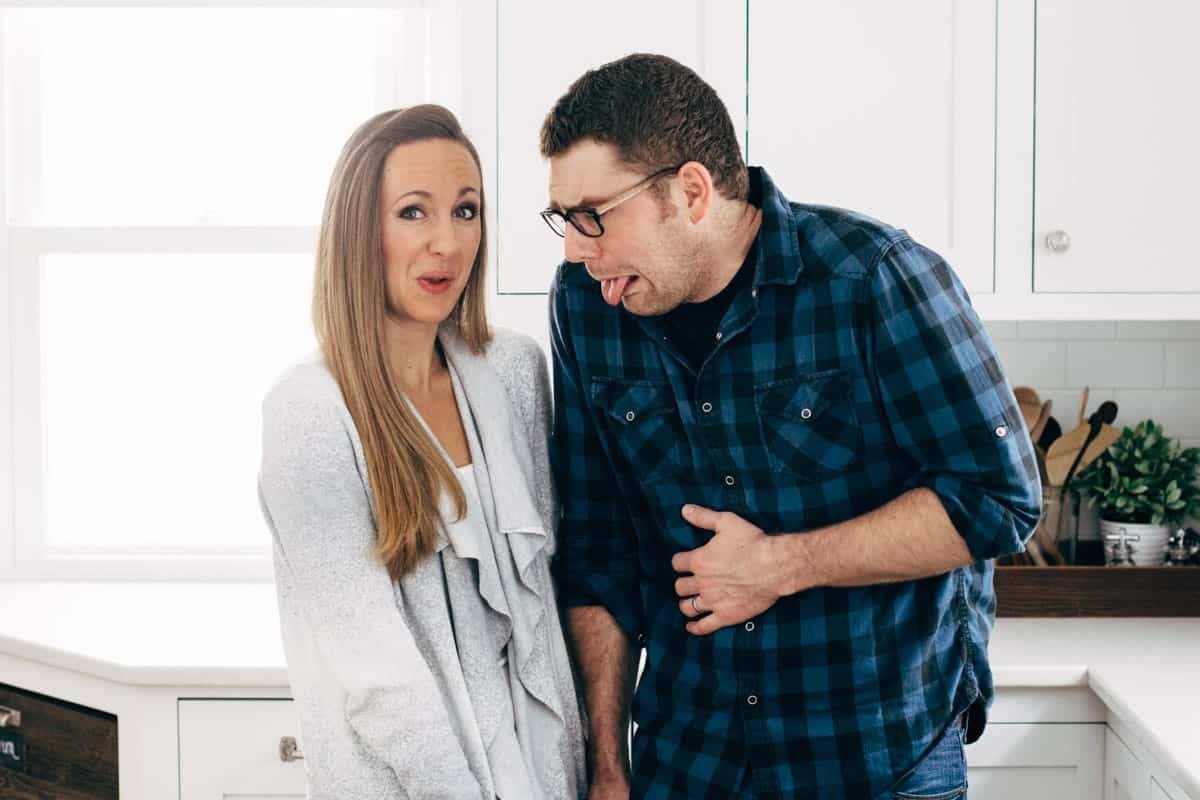 To warm us up, let’s take a peek at the fails that happened in a few other categories of life before hitting up the recipes. Just to get in the spirit, you know?

Starting us off right is a classic food photography fail. I could try to convince you that that was actually a delicious meal or I could laugh until I cry at everything about this photo.

…those tacos WERE really good, though.

Another 2015 personal fail in the fashion category would be one of a wearing-a-cape-as-a-shirt variety. I made my grand entrance and Bjork said: “Oh! …you’re wearing your cape today.”

Yes, dear one. THAT is how good I look in a cape.

Then there were the heart-wrenching facial expression fails of 2015 that were conveniently documented with expensive DSLR camera equipment during our photography workshops.

Please tell me you know this moment: when you did you hair and actually got dressed and feel like you look pretty good for once in your life, and then you see pictures of yourself and realize that you look like this: I have no words, really.

But as evidenced by the picture of me possibly acting out a worm in the bottom right of the collage, thankfully I’m the kind of person who DOESN’T EVEN NEED WORDS.

Now that you’re warmed up, and before I realize what a terrible act of oversharing this really is, let’s get to the good stuff! Starting strong with the green theme.

If you haven’t had it, Palak Aloo is one of India’s most delicious contributions to life as we know it and you need to find a restaurant that does it right and treat yoself with some naan and basmati rice STAT.

But a word of warning -> the palak aloo craving is all fun and games until you start attempting make it at home, at which point there is a 99% chance that you will find yourself in an all-consuming Nickelodeon Slime situation.

Unnaturally green, watery, and not delicious. *sits in corner and cries* ) grill supervision, a big fat minute or two of sheer panic, a box of baking soda, a patch of dead grass, a favorite grill pan laid to rest along with its charred black apricots, and an immediate purchase of a fire extinguisher via Amazon so we never again come that close to burning down our house. All for some grilled apricots.

If we want to take it to the ultimate fail level, let’s talk about the fact that this happened WHILE we had the three kiddos living with us this summer. Orrr curdled broccoli soup swamp water? WHY is it chunky? I had visions of a silky-smooth dressing and ended up with something more like a sandy-bottomed lake. Ummm, what? Who makes burgers out of cauliflower and quinoa? Sometimes I can’t even with myself. So annoying.

This combo absolutely fell apart like dirt in my mouth when I took the first bite. And at about three bites in, it sort of just became one with the bun. One big soft, mushy, crumbly burger wannabe.

Don’t be mad – I wanted this to work so badly that I actually DID FIX THE RECIPE and they are actually really delicious (I added cheese, so obviously) and I’m going to post them sometime in January. But just because I eventually will post the fixed up recipe doesn’t change the fact the their origins are shady. VERRRRY shady. FOR THE LOVE. I cannot even believe for one second that I put those slimy green patties in the pan thinking I would seriously want to eat them.

This picture + the word “patties” + the vision of myself preparing to put this in my mouth… gah. I need to lie down. …to Level: Needs-A-Barf-Bag with one flip of the spatula.

Why were there peas in there, you guys? PEAS. Green peas. No no no no no. Lock me up forever.

It’s really, really rare for us to completely throw food without even taking more than one single bite, but SO LONG, FALAFEL. And hello, finger photo bomb. It’s only fitting. Well hey there, red crusty junk in the pan!

That’s right, RED. Rough, gritty, stuck-on, red. Apparently the scallops had time to RUST real quick while they were in there for a three-minute sear?

Believe it or not, this was BEFORE the I sought help from the Martha tutorial. The fact that these were at one point going to be called APPLE FRITTERS… it hurts my heart. I take back any and all association I might have made with between my beloved apple fritters and these poser biscuit blobs.

I’m running back to you. There was, in fact, a moment in time during the year 2015 that I found myself (as a 29-year old, btw) standing in a kitchen holding a bag of popcorn that had full-blown FLAMES coming out of all sides.

This is not even a recipe – we’re talking about a push-one-button-on-the-microwave kind of a thing.

I don’t even know. I guess this is what I’ve come to.

No, but wait – SYRUP. This was supposed to be syrup.

It really was on its way to chocolatey greatness (homemade peppermint mocha!) but it had a pit stop at GAG STATUS before getting there. Think heavy mud meets minty syrup and milk. Instead of dissolving, it just blobbed around in the mug and – here’s the real kicker – it wasn’t even sweetened. No redeeming sugar to be found.  Ho-ho-ho and a Merry Christmas!

Not okay on so many levels. I was working with a limited amount of groceries, including a few random vegetables and one lone bag of dry tortellini, which SHOULD have made sense. It really should have. But somehow, rather than a healthy, resourceful tortellini soup, what I ended up with was straight-up veggie muck that tasted so horrible, I’m 99% sure it was poisonous.

This witch’s brew was one of the more toxic foods I’ve encountered in recent memory, but I’m sorry to say that I might have even eaten a small bowl of it in ultra-hungry desperation. Eeeeee I know sorry sorry sorry sorry sorry just try to block the visual out of your mind.

Fail within a fail? My specialty.

If you like this sort of food failure-ing, check out my previous failed recipe posts (who says that?!):

AND check out Jessica’s hilarious posts that have inspired me to share my failed recipes over the last few years. She’s the bomb.

Last year there were so many hilarious comments on the failed recipes post – I promise I’m not trying to drag you into the mud with me here on the failed recipe frontier, buuuut, I actually kind of am. Misery loves company? Is that what they say? It would make my day to read about your fails, style, photography, recipe, or otherwise.

Finally, friends, cheers to a 2016 that is full of recipe wins and fails, because our food people are the kind of food people who embrace it all!

The post The Failed Recipes of 2015 appeared first on Pinch of Yum.