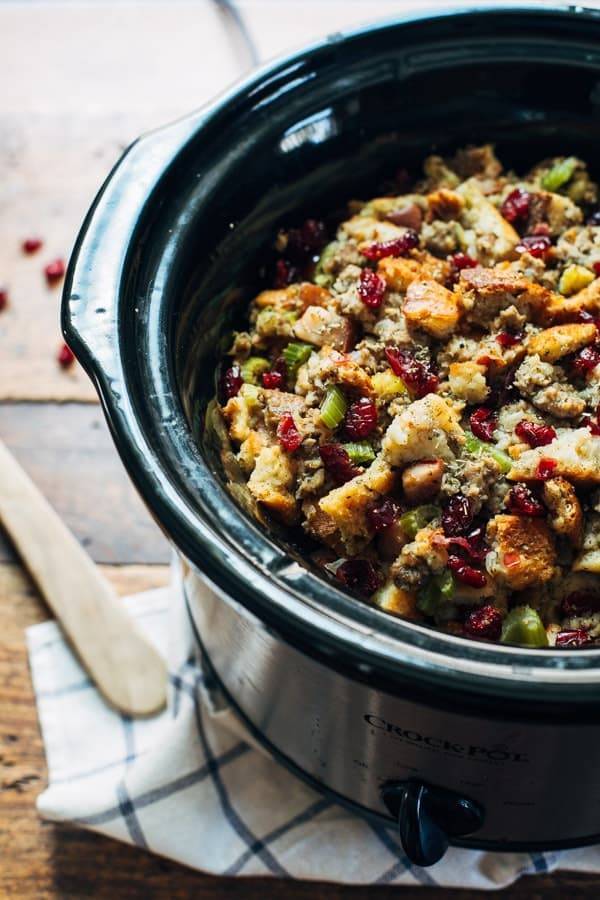 I really mean business with this Thanksgiving stuff now.

Beyond any shadow of a doubt, stuffing is my absolute all time favorite of the Thanksgiving foods.

Turkey and mashed potatoes are good, but it’s not really Thanksgiving to me without the cozy herbed bread cubes baked into that crispy, dense texture that only stuffing can have.

And even though stuffing works any time of year and it’s one of my favorite foods evvv-errr, somehow Thanksgiving is really the only time of year that feels appropriate to eat this carby goodness. Fellow stuffingers, the time is now. Please don’t waste one more second of this precious stuffing season eating anything other than stuffing. Agreed?

This particular stuffing is made with pears and dried cranberries for two reasons: a pop of gorgeous color (wheeee!) and a zing of sweetness (whoaaa!). The savory herbs with the bread and the sausage make a perfect comfy bed for those pears and cranberries to hibernate in all through the day of Thanksgiving prep.

And by the time everyone is ready to eat, the pear and cranberry sweetness has seeped right on into the savory, making that salty-sweet stuffing combo that’s all like MORE MORE MORE.

I have good news for you if you also love stuffing. That good news involves a bajillion delicious stuffing recipes all collected in one place, including this recipe for the Slow Cooker Pear and Sausage Stuffing created by little old me. I mean, who else would be trashy I MEAN RESOURCEFUL enough to make stuffing in a slow cooker? Right, exactly.

The stuffing lovers dreams are coming true right now –> 25 unique stuffing recipes, cooking tips, and a  stuffing vs. dressing poll (um, stuffing, obviously) all on the Jones Stuffing and More site. I’m not even joking you, there’s a recipe on this site for stuffing involving cinnamon rolls. CINN-A-MINNNNN ROLLLLS. Get it.

Here’s a screenshot of the site to show you where to find my recipe and to get you drooling. I mean, uhhm, what? For the full recipe of this Slow Cooker Pear and Sausage Stuffing, head on over to the Stuffing and More site!

I have really good feelings about your Thanksgiving stuffing this year. Like, I think I’ll stop by. Kthanks see ya soon. Thanks to Jones Dairy Farm for sponsoring this Thanksgiving-Stuffing-Deliciousness post!