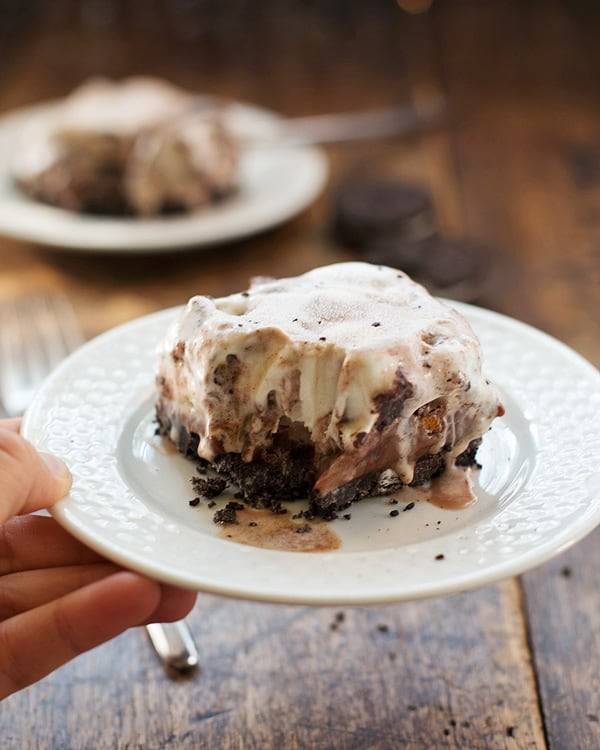 This is my Grandma’s recipe.

And I just love that my Grandma loves Oreo crusts and ice cream bars as much as I do.

This is Oreo crust and ice cream dreamland. It can’t not be addicting when it starts with a seriously thick layer of crushed Oreos with melted butter pressed into a pan, and is then topped with a borderline inappropriately rich layer of homemade fudge sauce, and finally covered with soft ice cream which should definitely be Peanut Butter Panic. Juuuust so you know. When you freeze all of that together, something amazing happens and it’s going to make you the most popular person this fourth of July. I actually really like ice cream, even in the winter. In Minnesota. I live on the edge, you guys. I’m sure it has nothing to do with the fact that we keep our house ridiculously, expensively, embarrassingly warm all through the winter so that Bjork doesn’t have to hear me complaining about how cold my toes are and deal with me leaving the oven open from November to April. Ice cream is just that kinda food. I have a few tips for success as you start to create this Oreo ice cream wonderland in the next 20 seconds.

First, don’t use too much ice cream. Otherwise you’ll take it to a dinner party and proudly unveil the dessert you brought to share with 4 couples and realize that no, a 3 foot thick layer of ice cream will not, in fact, freeze all the way through. And then you’ll serve something called Oreo fudge ice cream soup instead. And if you have a food blog? You might feel kind of bad about that. Even though it actually still tastes kind of good because it’s ice cream and crushed Oreos and fudge. Another thing: Pour the fudge right on the crust. The first time I made this I poured the fudge over the ice cream and sort of swirled it in and had a bit of a disaster. Plus I missed out on the epic thickness of that double punch Oreo-fudge crust layer. It’s not to be messed with, you guys. The takeaway is that a molten hot chocolate sauce poured over something frozen will be, uh, annoying. Keep it in order and go for the fudge-topped crust instead.

Which leads me to the next thing. Don’t over-soften the ice cream. It’s totally tempting to just zap it in the microwave for like, what, 8 minutes? I know because I gave in during round one of this ice cream madness and ended up basically pouring ice cream milk over the top layer. The biggest problem here is that it won’t refreeze in the same way and you’ll be cursing at your microwave instead of enjoying the soft creamy texture of the refrozen, appropriately softened ice cream. So just take it slow. Be okay with more firm, more messy ice cream assembly. It should be more like PRESSED over the crust. Final thing to know is that the ice cream variety is up to you, but I would like to strongly suggest Peanut Butter Panic, Reese’s Peanut Butter Cup, Bunny Tracks, Moose Tracks, cookies and cream, or any other type of ice cream that is full of chocolate chunks and caramel swirls and stuff like that. My Grandma uses Moose Tracks and everyone dies every time. IT’S SO GOOD.

PS. Moose Tracks? Is that a Minnesota thing?