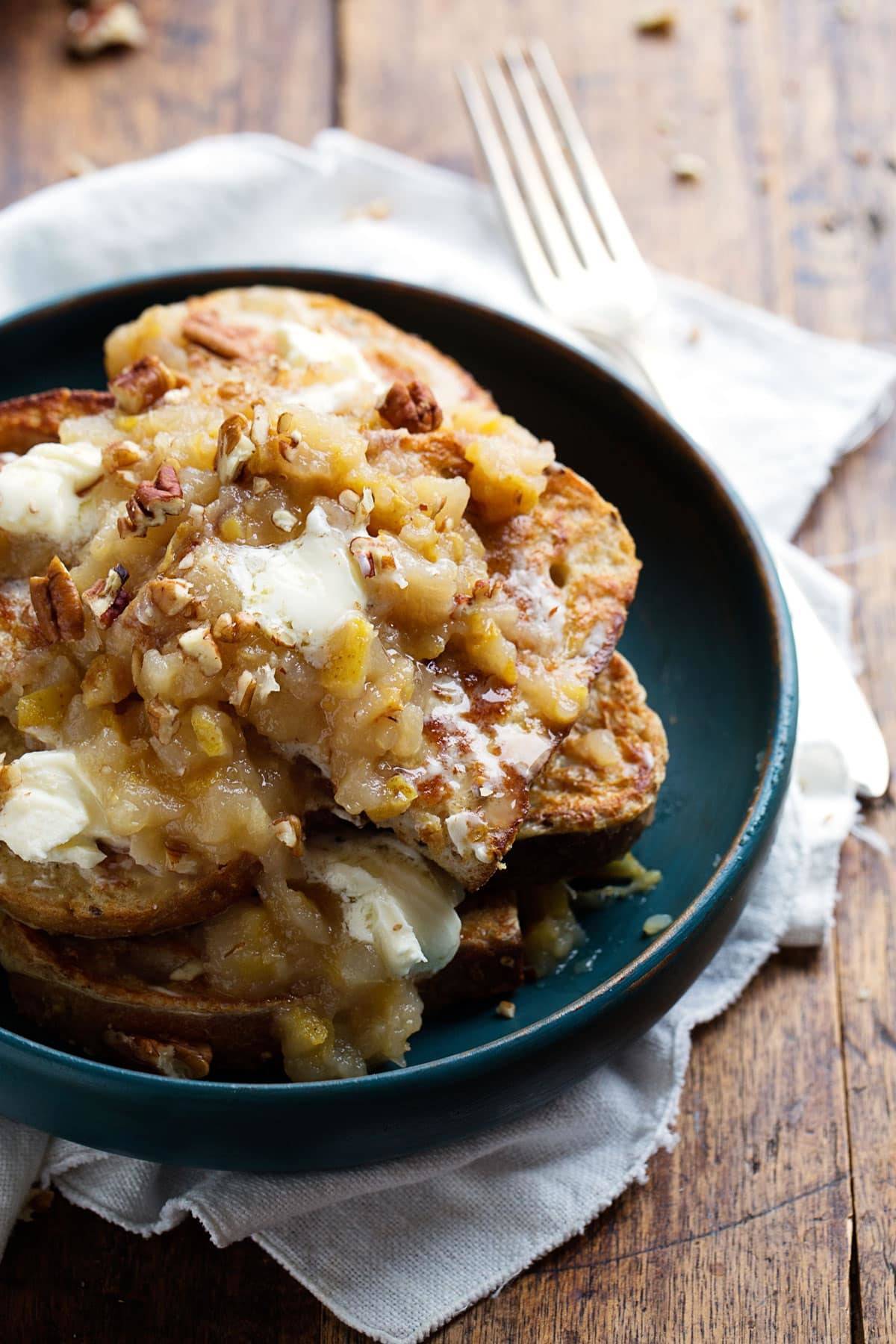 I can’t even with this.

This is whole wheat French toast with PEAR CHUTNEY and MASCARPONE. Do you even see that white melty creamy stuff on the French toast that looks like butter only better? Look at it and study it because it’s how you’re going to make all your French toast dreams happen in real life. Just one little (large) shmear of mascarpone cheese is all it takes, bebe. Get down with your mascarponey self.

Thanks to that homemade buttery pear chutney with the cinnamon sticks which made my house smell amazingly cozy for daysss, this could probably be considered my first fall-inspired recipe of the year.

Hold the phone – I just dropped the f-a-l-l word on you right here in the smack-dab middle of August and you didn’t even flinch. I totally knew we had it going on. Now is probably as good a time as any to let you know that I have a thing about fall food.

Cooking and eating in the fall is, well, not to be dramatic or anything, but it’s probably the best thing that has ever happened to me ever in my life EV-ER. No other food season can compete with the cinnamony-spiced flavors, the pumpkin, the toasty nuts, the apple everything, the slowly simmered soups, the hot crusty bread dipped in said soups, and the trading of iced coffees (which I am currently in love with but willing to give up) for creamy pumpkin spice lattes. Ultimately fall eating is about the comforts of foods that will warm you, body and soul, right straight down to your toes after being outside on a perfectly crisp 60-degree fall day. And hopefully all this happens while you’re wearing your most comfy jeans and a hoodie because the best things in life always do. Right? Right.

The pear chutney that I made for this recipe was never really intended for French toast. It was actually more of an oh-my-gosh-all-the-pears-are-getting-mushy panicked attempt to find a way to use them up quickly after buying this massive tray thing of deliciously perfect pears from Costco that I’m 99% sure was meant for a family of giants. It was one of those times that I wished Costco wasn’t making me be so Big America Greedy (like really? 20-something pears?) but then in the end it actually forced this pear chutney upon me, and for that reason I can forgive Costco for its Big America ways.

I’ve since made this chutney three times and now I just keep it on hand for French toast emergencies and for my daily crackers/cheese/chutney lunching. But actually, I’m totally serious. It’s my new lunch staple. We made this French toast for work-from-home breakfast like 8 times last week (uhh, except…whatever) and it was so awesomely cozy. The whole wheat bread is nice and sturdy before it takes a good swim in the batter and hits the frying pan, making for a French toast is lightly crispy, brown, and textured on the outside and thick and spongey on the inside.

The pear chutney is su-pear-sweet with the tiniest hint of warm savory thanks to the caramelized onions up in the mix. No I know, that sounds weird, but it’s a chutney staple and makes the flavor so rich, deep, and wonderful on so many levels. Trust me, friends. This magic sauce serves as a naturally sweet, chunky, cozy, homemade fruit syrup of sorts on top of those golden brown thick slices of French toast.

And the mascarpone? I am not overreacting at all right now because this is a FRENCH TOAST GAME-CHANGER. Just a few dabbles of that stuff over the top of your steaming hot tower of French toast means melty little rivers of something like cream cheese meets butter. Only better. Pinky promise. 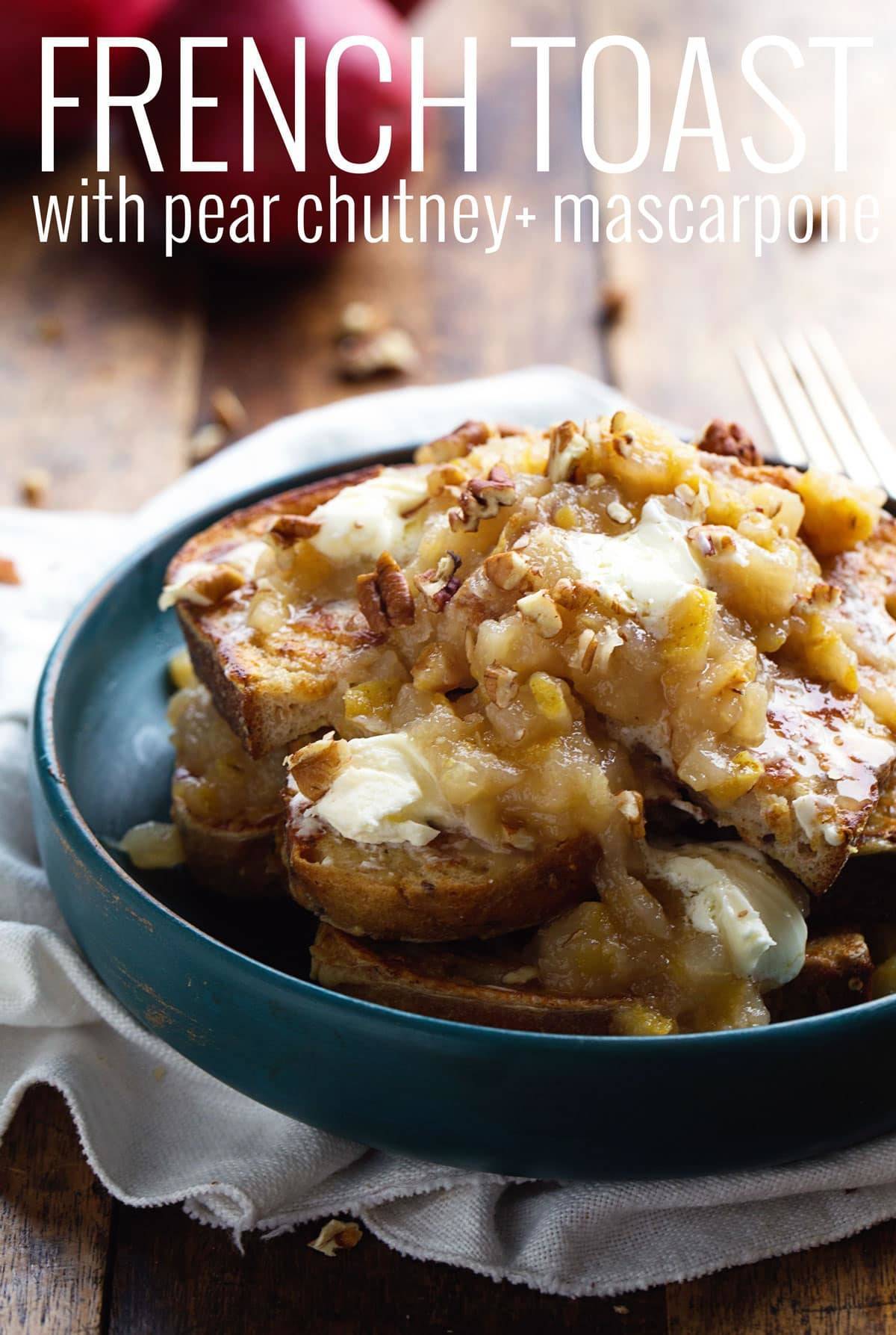 This French Toast is topped with Pear Chutney and Mascarpone for the most decadent and cozy fall-inspired breakfast. YUM!

For the pear chutney:

For the French toast:

The post French Toast with Pear Chutney and Mascarpone appeared first on Pinch of Yum.