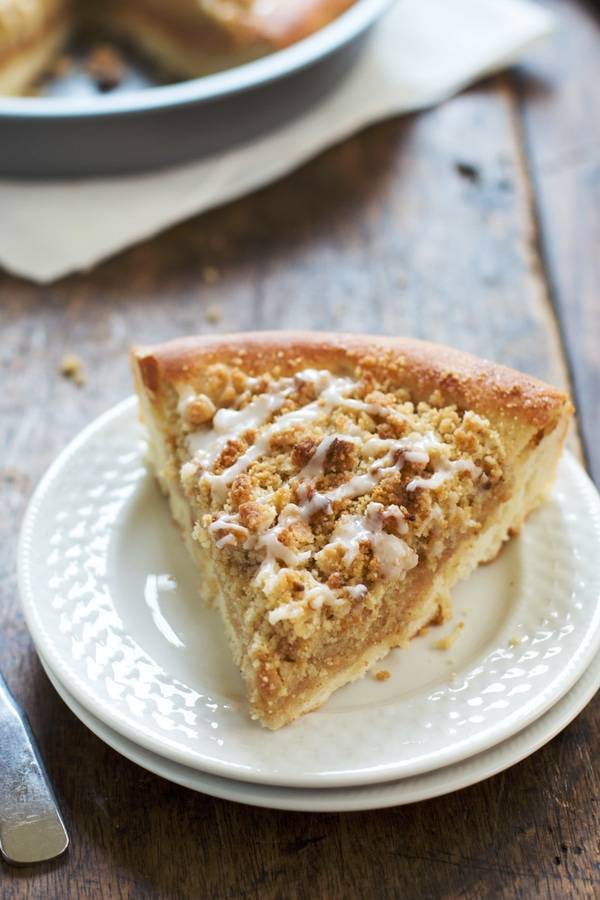 Oh, haiyyy. Just gimme a minute to lick the final cinnamon streusel dessert pizza crumbs off my sticky fingers and attempt to be coherent enough to write something.

Or get another slice. Cause coherent thoughts might not be happening.

This pizza, and by pizza I mean subtly sweet thick crust topped with a heavy sprinkling of cinnamon streusel crumbs and drizzled with a warm maple glaze, is so distractingly good. And much like yesterday’s awesome chili was inspired by my hoarding of those blue corn and flax tortilla chips from Target, today’s dreamy cinnamon sugar greatness was brought on by a summer trip to the Wisconsin Dells and a fine dining experience at the one and only: Pizza Ranch.

I kind of cringed when I wrote that because I’m visualizing of all you fancypants readers sitting there drinking your tea with your pinkies out who will now judge me.

Or more like GET JEALOUS. Fancypants, get real witcha self. What I relearned at the Pizza Ranch is that dessert pizza is basically the world’s most lovable food.

Show me a person who doesn’t like dessert pizza and I will show them this photo/diagram of deep dish cinnamon streusel dessert pizza, and how that barely sweet pillowy crust is just saturated with that butter and sugar cinnamon streusel while still holding on to its textured crumbs on top and how the whole thing is being altogether bear-hugged by that warm maple glaze.

“But when would I even eat this?”

Okay. I know this is breaking the rules on a few levels, but hear me out:

Eat it for breakfast. It’s so thick and pillowy and bready, and the cinnamon flavors are so cozy and I swear the flavors taste the better when you are wearing sweatpants and a fleece. At least that’s true if you live in Minnesota and you own items of clothing called “fleeces”. It reminds me of a cinnamon roll in dessert pizza form, or coffee cake pizza. It begs you for a steaming mug of coffee, a big glass of milk, or a shmear of sweet cream butter. But I did not just say that.

I think normal people have it for dessert or something. And I guess that’d work. 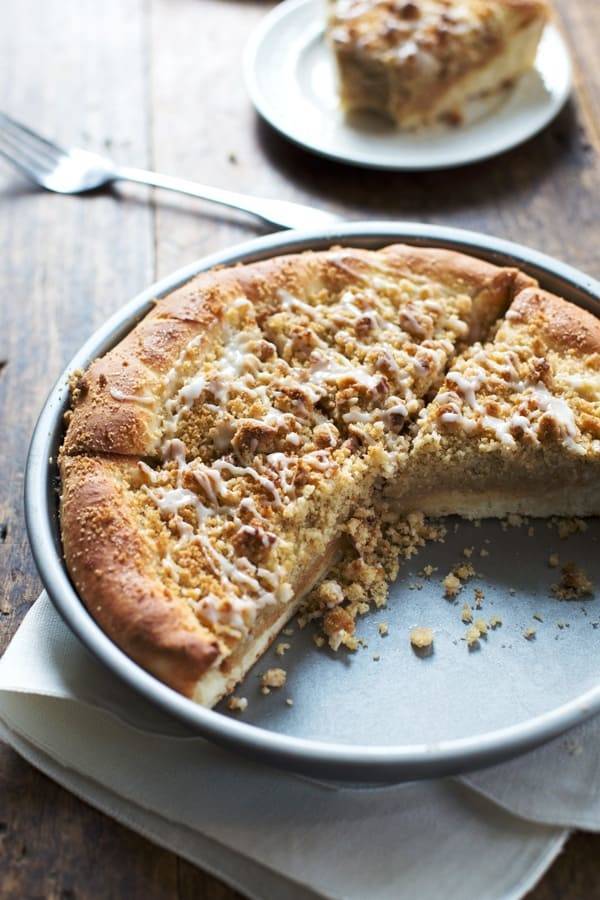 **I was already making the cinnamon swirl bread when I made this recipe, so I just used half of the base dough for my crust in this recipe. I’ve also used store bought dough rolled into a circle and that worked just fine, too. You can adjust the amount of dough depending on how thick you want it.
**Use canola oil if you’re worried about the taste of the olive oil. I didn’t notice a taste at all.

I have one quick announcement to make unrelated to deep dish cinnamon streusel dessert pizza: Our house offer was accepted on Monday and come October-ish, we will be living in a cute lil’ old house by a beautiful lake! asjdflkajshgkldjas;fj